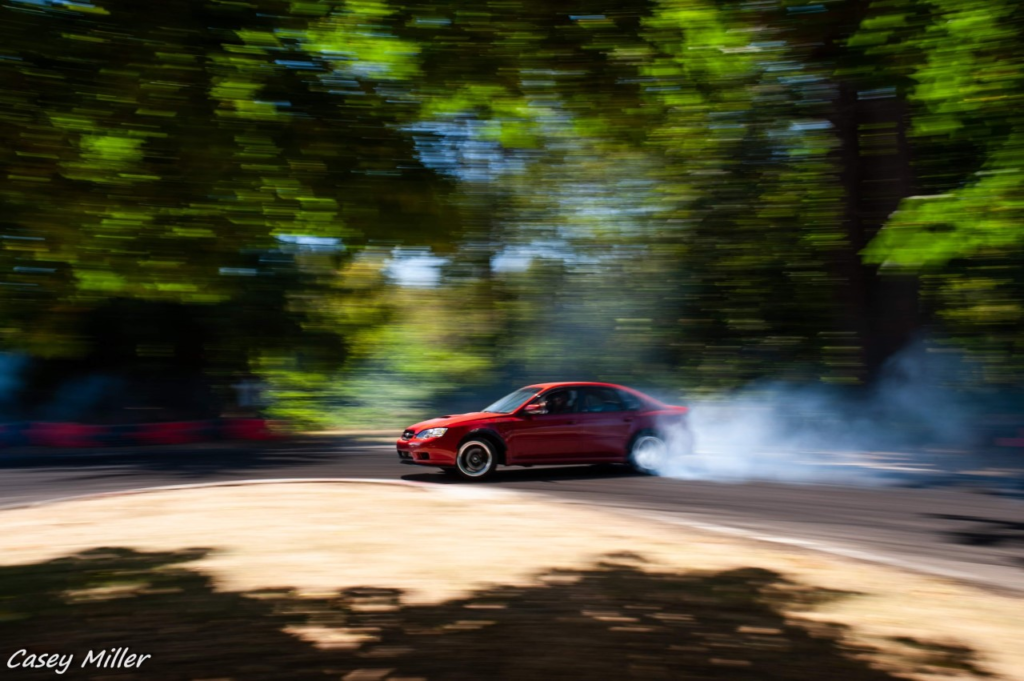 “It’s about the journey, not the destination”.

A cliché worth repeating for many drift car builds, as they often take many years of labour and are ever evolving.

Nick Prouty’s 1JZ Legacy Drift Build fits this mould pretty well. After many years of hard work, ambition & modifications, the car has recently hit the drift track in its current form. It’s been a long and interesting road to get to this point!

The Legacy used to be Nick’s daily driver and was originally an automatic car that he manual swapped.

Over time, as he attended drift events as a Spectator, the ‘drift bug’ began to bite.

Nick explains how it began to get serious: “Brett Williams, another Driver, gave me my first ride along in his old G35 drift taxi at PARC and I was hooked! I spent a good while continuing to go as a spectator and wishing I could make the Legacy RWD”.

Instead of doing that right off the bat, Nick bought a Fanatec drift simulator and learned to drift on it. After a year of virtual training, he purchased a 5.0 swapped E36 from a mate and took it drifting. The 5.0 unfortunately blew up after a few events but it was fun while it lasted. He thought about using the BMW chassis with another engine, but the Subaru Legacy was still calling his name.

“I still had dreams for the Subaru to become RWD so I eventually decided to do just that. I welded the Subaru’s center diff and converted the rear end to a Z31 300zx long nose R200 diff and retrofitted 240 axles/hubs in.”

“After I finished it I took it up to Spirit Peaks for its first shakedown event, and unfortunately blew up the EJ255 after only 5 laps… That was heart breaking for sure. It made me realize I didn’t want an EJ anymore, so I decided to do the logical thing and put a JZ in!”

With no experience of doing an engine swap to this scale before, Nick was surprisingly confident and went ‘full send’ buying a non-vvti 1JZ out of a D1 car. It came from Trenton at Yplate, complete with a single turbo TD06-20G setup and HKS cams, so it seemed like a good fit.

Nick took the transplant into his own hands, with the assistance of some parts from USA based Suppliers.

“I was fortunate enough that Xcessive Manufacturing had already developed JZ to Subaru motor mounts for the GC chassis, so I gave them a shot and they worked great to mount the motor in. I also went with one of their adapter plates to go to a BMW transmission, as I was familiar with them and they have a small form factor considering their strength.”

“I decided on an E46 M3 Getrag 420g SMG transmission and did the bellhousing modification to install the detents and convert it to a full manual trans. The car also uses an Xcessive twin disc setup and a retrofitted BMW two-piece driveline. Finally, I 3D modelled an adapter to fit the rear CV to the R200.”

The huge array of modifications all come together well.

Completing the set-up is a Link Fury ECU. The Fury is ideal for JZ powered Drift Cars as it caters for six-cylinder engines with direct spark and sequential injection and has onboard digital wideband lambda control.

“As far as the ECU goes, I went with a Link Fury so I could keep the Subaru drive-by-wire throttle body. It was super cool because the throttle body almost bolted up to the JZ intake manifold, the two top bolts literally fit perfectly and for the two bottom bolts I just had to drill and tap some holes. Easy Peasy.”

Although relieved he didn’t have to go to the extent of fussing about with retrofitting a cable throttle pedal in, Nick still took on the task of making the wiring harness himself.

“It was my first attempt to make an engine harness, so I did lots of research, learned a ton from High Performance Academy, and I’m super happy with how it turned out.”

“I made the coil and injector harness separate pig tail harnesses in case I ever decide to switch to different ones. I wanted to retain the factory Subaru bulk head wiring connector (looking back it was a waste of time to, but oh well) so I reached out to Iwire and he helped me with sourcing all the new pins so I could re-pin the connector.”

“Overall, I’m extremely happy with how it turned out, it’s not perfect but it worked pretty flawlessly. I’m proud to have been able to accomplish such a thing without ever doing it before.”

Nick and the 1JZ Legacy had their first shakedown at PARC just recently and it went super well! He’s happy with how fast the car is, as well as the level of natural grip and its driveability.

“I feel so happy and the feeling of a project coming to completion and performing well is incredible!”