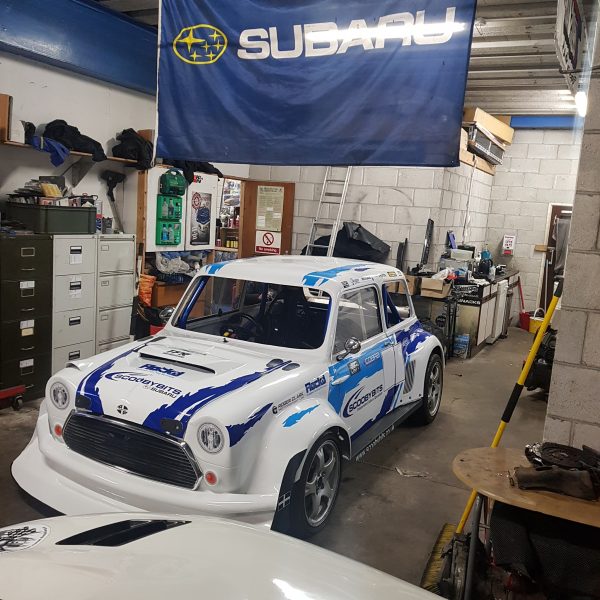 Link ECU Dealer ScoobyBits (UK) have been working hard on this incredible AWD build for a while now. With such an unusual engine and chassis combination, you can imagine this car has taken a fair few hours to construct... From scratch. The team have used a WRX engine and floorpan, then fitted custom cages from the shell to floorpan, making the mini shell removable.

The floorpan from a 2004 WRX caters for the Subaru gearbox nice and easily, but of course everything else including the engine, suspension, seating, fuel tank, radiator and more all had to be fitted into the custom chassis, while ensuring that there is plenty of clearance for everything.

The custom fibreglass shell was created by Paul from TFR Customers. Paul is located on site at Scoobybits and available for project Fibreglass work for any potential customers.

Incredibly, the Minipreza is now MSA logbooked, meaning it's eligible to compete at Motorsport events throughout the UK. On the plans are street sprints, hill climbs and track days around the country.

Using a Link G4 WRX v5-6 PlugIn ECU made a fairly easy job of the wiring. Though, the stock loom was heavily trimmed. It went from this:

A Link wideband & MAP sensors allow for the PlugIn ECU to accurately measure how the engine is running and be calibrated accordingly.

The 'Mubaru' was recently tuned on site on the Dyno Dynamics rolling road with Scoobybit's neighbours, ARM Motorsport. They haven't chased high horsepower numbers, instead trying to give the car a smooth power delivery. It's currently running 1 - 1.2 bar of boost, with 300bhp. There is definitely potential to go further in future. However, at just 650 kilograms, this is already a serious power to weight ratio!

Here is the car's first run on the rollers:

Then, the car got out testing to see how the overall package performs:

How exciting to see this build come to life! This is one incredible weapon, which will be spectacular to watch in action during events over the next year or so. Scoobybits would like to thank everyone who has helped out with this project, especially Lee Martin, Paul and everyone else who chipped in.

Make sure you follow Scoobybits online to see more from this project:

← The DMEC King of RigaConor Shanahan →